Sewer line belly vs. pipe channeling – are you wondering what’s wrong with your pipes? What does each diagnosis mean for your property and what repair options do you have?

You might not think the difference between having a sewer line belly or a pipe channeling diagnosis will ever impact you. After all, most people call a specialist to provide a solution and don’t worry too much about the details of the problem. Still, it’s a good idea to understand the difference and what’s involved in each situation. Once you understand the meaning of each condition, you can make the choice in the most appropriate and cost-effective repair options for your sewer line.

What is a sewer line belly?

A belly is a sag in the pipe that bows downward, creating a negative slope. Once a sag develops, the flow of the wastewater is no longer effective. Some of the wastewater will move across the belly normally. The rest gets trapped inside the sag, becoming stagnant over time. When more wastewater enters the pipe, it strikes against the stagnant water, slowing or blocking its movement. Over time, particles of waste accumulate in the belly, creating a solid clog. Eventually, the entire pipe could become clogged. With a belly, you will usually have problems with wastewater not draining out.

Several external and internal forces can lead to a sewer line belly. If something causes the soil on the outside of the pipe to shift, it may cause the pipe to change shape. Sometimes specialists cut corners during the sewer line installation, keeping it from working effectively. If the line breaks at the joints, the pipe can take on a different shape, potentially creating a belly.

Some specialists only recommend repairing a sewer line belly if it’s causing a problem. They may suggest letting it go if there’s little to no risk that it will get worse. The problem is that the problem has already advanced to this level. Who knows how much or when it will turn into a more serious problem?

The reason many homeowners prefer to take a ‘wait-and-see’ approach is that the only repair method for bellies is to replace the affected section of pipe. Installing a new pipe will restore the slope and improve the integrity of the existing pipe. Unfortunately, this is often a large project that involves a lot of time and money. Trenchless pipe repair methods offer a less disruptive and cost-effective method of pipe repair over conventional methods. A belly is one of the exceptions where these methods aren’t recommended.

What is sewer line channeling?

Sewer line channeling is the development of a channel into the bottom of a sewer line. The motion of the water continually crossing the same area of the pipe causes it to wear down. The damage also makes the pipe vulnerable to the infiltration of tree roots, insects, and more. Sewer line channeling is a common problem in cast iron sewer pipes. Sometimes, the pipe is already gone by the time you realize there’s a problem.

Some signs of sewer line channeling include odd sewage odors, green patches in your yard, and water seepage. Like bellies, channeling sometimes causes slow drainage, making it easier to confuse the two situations.

One major difference when considering a sewer line belly vs pipe channeling is that with the latter condition, the sewer line usually retains its slope. Even though the pipe may be completely gone in one area, trenchless pipelining might still be an option. This modern approach to pipe repair doesn’t cause the disruption to your property or your lifestyle that you can expect with traditional plumbing. It also costs thousands of dollars less. 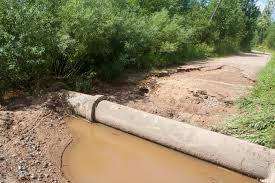 Sewer Line Belly Vs Pipe Channeling: Getting Past The Confusion

Specialists who get calls from clients saying they have a sewer line belly often end up with a pipe that’s channeled. Initially, both problems seem the same. Once you call a specialist, the first step is diagnosing the problem with a special sewer camera. But that isn’t enough to identify the whole problem.

The only thing the camera shows in either case is a lot of water. Using a water jet to clear out the water and debris allows the specialist to clearly view the pipe. The importance in distinguishing between the two problems is the difference in the options for repair. 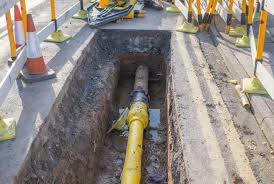 The term “bellied pipe,” also known as a “low spot,” essentially refers to a pipeline that’s sagging. A bellied pipe usually occurs as a result of improper installation, particularly when the installer uses insufficient bedding. Pipeline and trench bedding consists of a number of materials which provide a solid surface for the pipe to rest on. Without bedding, the pipeline becomes susceptible to sagging from shifting soil or poor soil compaction. A bellied pipe can only be fixed by manually repairing the line. A camera inspection will usually reveal the presence of a sagging pipe, the severity of it, and whether it requires immediate repairs.

Implications of a Bellied Pipe

A low spot will trap water much the same way as a P-trap pipe under your bathroom. This may not necessarily cause problems, and your pipes may continue to function normally. However, solid waste can collect in the low spot, causing a soft backup. This isn’t anything too serious and can usually be fixed by a local plumber using a typical manual auger. However, the low spot should still be corrected to prevent the need to clear a backup every few months.

What Is A Sewer Line Belly, Sag Or Low Area?

A sewer line belly, sag, or low area, can be identified by a pipe holding water after flow has stopped or other causes of pooling water, such as debris build up and channeling, have been ruled out. Sewer line bellies or low areas become problems when debris collects and causes a blockage or backup. A belly in a sewer line, sag, or low area is often caused by geological events such as soil erosion, foundation settlement, earthquakes or by human error such as poor soil compaction or poor installation.