It’s possible to help reduce mosquito populations around a home through the use of natural or biological means. Predatory fish, plant repellents, bacteria and even other mosquitoes can all take their toll on the mosquitoes that breed and feed in a given area.

The Gambusia is a small, freshwater minnow-like fish native to the Southeastern U.S. They are surface feeders and will eat mosquito eggs and larvae by the hundreds every day. A dozen gambusia are good for about 48 surface feet of water. The fish are hardy, capable of surviving in stagnant water, grow only to about two inches in length and breed to the size of their container to prevent overcrowding.

Most local mosquito control programs use the fish and often provide them for free to homeowners with mosquito problems. Because mosquitofish also feed on the eggs and young of other insects and fish, they should be used only in water that does not connect to lakes, streams or rivers. Improper use of the fish is suspected in the extinction of same native species of amphibians.

These insects may look like scary biters, but they are only dangerous to mosquitoes. Dragonfly larvae, “nymphs,” feed on mosquito larvae, and adult dragonflies feed on adult mosquitoes. The key to attracting dragonflies is to provide an environment that is comfortable and safe for them. A small pond, shallow at one end and deep at the other, with vegetation that grows out of the water and plenty of flat rocks surrounding it should do just fine

These and several other plants reportedly contain oils that are repel mosquitoes. The citrosa is even marketed as the “mosquito plant” for its supposed success in keeping the insects away. However, the problem with using any plants to repel mosquitoes is that the oil is not naturally released into the air from an undisturbed plant. The leaves must be crushed before the oil is released, and even then it does not spread far. 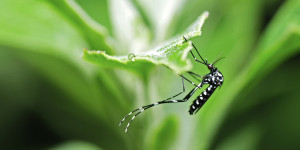 One of the best ways to keep a yard clear of biting mosquitoes is to use a mosquito trap. When set up properly, just one or two of these ingenious devices can kill thousands of mosquitoes and all but wipe out a local population. The style of trap varies by brand, but generally they range from indoor units the size of air purifiers to large units that resemble barbecue grills. Some run on electricity, while others are powered by propane tanks.

Because mosquitoes find their prey by detecting CO2, octenol and other chemical odors, as well as light and heat, most mosquito traps use some combination of artificial smells and lighting displays to lure mosquitoes.

Brands like the Mosquito Magnet and Skeetervac burn propane both to power the trap and to release CO2.  Electric machines like the Mega-Catch Ultra mosquito trap rely on odors (Octenol) heat and a lighting array of oscillating frequencies in addition to an optional CO2 system that works off canisters like those used in soda-dispensing machines.

The pros and cons of mosquito trap brands

The effectiveness of mosquito traps does seem to vary from brand to brand and location to location. In a university test conducted in the salt marsh surrounding a bay in Northwest Florida, a Mega-Catch Ultra mosquito trap caught nearly 3,000 mosquitoes, outperforming several other brands, including the Mosquito Magnet Liberty, the Lentek Mosquito Trap and the Coleman Mosquito Deleto. 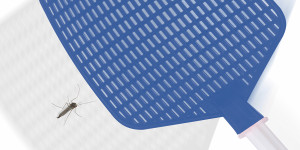 What is the best mosquito trap you can buy?

When you buy a mosquito trap, you’re making an investment in the comfort and safety of your home. And, like any investment, you should give it careful consideration before making a decision on how to spend your money.

You will learn that not all mosquito traps are created equal. Most will attract and kill some mosquitoes. But only a few can do it consistently, for the right price, and on a scale that will help clear the biting insects from your yard.  Fortunately scientists have performed tests on these machines to show which ones perform the best and under what circumstances

revealed how these machines were capable of capturing and killing thousands of insects in a single night.  And at those rates, it would only take about two months to collapse a local mosquito population.

When hunting for blood meals, female mosquitoes fly about 25 feet or less off the ground, using several types of sensing organs to find human prey.

Antennae that detect the carbon dioxide released from a person’s lungs and are capable of picking up more than 340 chemical odors produced by human skin, including octenol, a substance also found in perspiration.

Compound eyes made up of hundreds of tiny lenses designed for spotting movement and distinguishing prey, particularly useful for day-biters that rely more on visual cues. Accompanied by two light-sensitive simple eyes.

Maxillary palpus located on the head and believed to be sensitive to heat, helping mosquitoes to locate warm-blooded prey and pinpoint capillaries that are closest to the skin and more easily reached.

Insecticides are a quick, powerful way to get rid of mosquitoes around the yard, but, unfortunately, they are only temporary. The effect usually lasts only as long as the insecticide is present, so as soon as it drifts away or dries out, the mosquitoes are back.

Mosquito control officials use insecticides only when mosquitoes are especially thick and only in combination with other form of mosquito control. The same should apply to use around the house. By itself, insecticide is not a long-term solution.

Insecticides are commonly dispensed through a fog or ultra-low volume mist. They are available at most home and garden stores and come in hand-held applicators or devices that can be attached to a lawn mower.

Malathion – an organophosphate often used to treat crops against a wide array of insects. It can be sprayed directly onto vegetation, such as the bushes where mosquitoes like to rest, or used in a 5 percent solution to fog the yard. In the small amounts used for mosquito control, it poses no threat to humans or wildlife. In fact, malathion is also used to kill head lice.

Permethrin – one of a group of chemicals called pyrethroids, it is a synthetic form of a natural insecticide found in chrysanthemum flowers. It usually is mixed with oil or water and applied as a mist, about 1/100th of a pound per acre. Like malathion, permethrin kills mosquitoes by disrupting their central nervous systems. Not harmful to people and animals in small amounts, but it is toxic to fish and bees.

The insecticides will work for several days when applied to shrubbery or grass, but will break down over time, especially in rain. When released into the air through fog or mist, they usually are good only for a few hours before they become too dissipated to be effective.

How long do mosquito bites last?

The bumps are actually an allergic reaction to mosquito saliva. The reaction can vary from person to person, but usually last no more than 24 hours. Try a topical anti-itch cream or an anti-histamine such as Benadryl.

Does a mosquito have teeth?

No. A mosquito has a proboscis, which is a long, pointed mouth part used to pierce the skin. It contains two tubes; one for injecting saliva and one for drawing blood.

How many times can a mosquito bite?

A female will continue to bite and draw blood until her abdomen is full. If she is interrupted before she is full, she will fly to the next person. After feeding, the mosquito rests for two or three days before laying her eggs, then is ready to bite again.

Can a mosquito bite transmit STI’s?

Yes.  In August 2016 the CDC confirmed that Zika virus can be spread sexually from men or women.

How do mosquitoes spread malaria?

The mosquito feeds on an infected person and picks up the Plasmodium parasite. The parasite develops in the mosquito’s body for about two weeks. When the mosquito feeds, the Malaria parasite is passed on in saliva. They transmit West Nile virus and other diseases in similar ways.

How long does a mosquito live?

Males usually live about five to seven days, while females can live two weeks to a month, under ideal conditions. However, the females of some species hibernate during winter, so they can live several months.